Please note: Community posts are written by its members and not by Redeye’s research department. As a reader you’re always encouraged to critically analyze the content.

Initiator Pharma is a compelling investment, that I estimate could have 6-month upside potential of 500-800%. Initiator Pharma represents a rare opportunity to own a potential Unicorn, under-the-radar stock, at a deep discount valuation. I believe the stock market has created a huge imperfection in Initiator Pharma when it comes to it's potential with a multi billion addressable market with no other fully developed Product in sight. IPED is described as the next gen "Viagra" There is several near-to long term catalyst which I Think will propel the stock to fair value.

Why does the oppurtunity exist?

This dramatic under-valuation for Initiator Pharma exists for several reasons; 1) It is an underfollowed nano-cap; 2)Covid has temporarily postponed the Company activities. 3) We live in a "what's not up, is not a buy" era.

According to the Company website: Initiator Pharma is a Biotech company established in Aarhus, Denmark. Its main asset IPED2015 represents a novel treatment paradigm for the treatment of Erectile Dysfunction (ED) and will improve the quality of life for the growing number for patients (and their partners) that do not respond or cannot be treated with the current marketed medication. Initiator Pharma is established as a Spin Off based on assets from Saniona AB – an ion channel drug discovery company listed on the Swedish Stock Exchange First North a multilateral trading facility (MTF), (Saniona at www.firstnorth.se). The asset comes with a large preclinical and early clinical package that Initiator Pharma has combined with a highly experienced ED research group and specific competencies with conducting preclinical, clinical development and regulatory approval. This combination represents a unique opportunity to attain a Clinical Phase IIa Proof-of-Concept in 2019..Initator Pharma targets the non-responders to PDE5i drugs, a potential market of around 100 millon men in 2025 where current therapies offer very limited opportunities to maintain a normal sexual life. Our drug candidate IPED2015 exerts its action through a novel mechanism targeting central neurotransmitters. In addition to offering a novel mechanism with the potential to help non-responders to drugs in the PDE5i class, we believe IPED2015 is likely to reduce the side-effects of the current treatment.

IPED2015 - IPED2015 is being developed as a new oral treatment for erectile dysfunction, and is more specifically targeted at men with organic ED. Unlike established treatments, IPED2015 has a double-acting mechanism in both enhancing the desire to have sex and strengthening the blood flow to the penis.

In august 2018, the clinical development of IPED2015 began and a phase 1 study was initiated which was successfully completed and completed almost a year later. Immediately after the phase 1 study was completed, a phase 2a study was started with the aim of obtaining a first indication of effect in men with severe ED.

The Phase 2a study was an exploratory proof of concept study that included 12 men with ED. an inclusion criterion was that participants had a measurement value of less than 12 based on the IIEF-5 scale, patients with moderate to severe ED. These are patients who usually respond poorly to treatment with traditional PDE5 inhibitors.

The phase 2a study was a so-called cross over study where the participants were allowed to form their own control group. At the first dose, half of the patients received a dose of IPED2015 and the rest received a placebo dose. The treatment was followed up for 24 hours on the clinic. At least 5 days later, the groups were changed and those who first received placebo were given IPED2015 and vice versa. Primary goal variable was to measure stiffness in the penis.

The results in the phase 2a study showed a statistically significant treatment effect for IPED2015 compared to placebo, where 25% of the patients achieved the primary goal. During the study, a statistically significant effect was also measured for IPED2015 compared to placebo regarding stiffness and swelling, measured with rigiscan and the measures Rigidity Activity Units for stiffness and TAU for swelling.

Next Step: An agreement was recently signed by MAC Clinical Research, an organization that conducts research under contract. MAC finances up to SEK 23 million from a planned Phase 2b trial via a convertible credit agreement. The following conditions apply: After completing phase 2b study, MAC can convert approximately SEK 23 million to a share price of SEK 7.5. If MAC chooses not to convert, an interest rate of 1 percent per year runs and the loan is repaid after 3 years.

In the study, individuals with organic ED, who do not respond to current treatments, will be recruited. The study will be conducted at MAC's facilities around the UK.The study is scheduled to start during H2 2021, following approval by the UK MHRA. Schedule to complete and report results is expected during 2H 2022.

IPED2018 is the second project on the pipeline. Also, a candidate with BLOCKBUSTER potential! What is even more interesting here, is that the candidate may be developed as two separate candidates if a Big Pharma deal occurs. One substance for ED with depression and the other one for depression.

The latest project to be included in the pipeline is IP2018, which in the beginning of 2020 was acquired by Saniona and also with a history from Neurosearch as a new treatment for depression and anxiety, and two phase 1 studies were conducted for this purpose. Following the acquisition from Saniona, some ownership remains in the project, where Saniona is entitled to 20% of future income to Initatior and a single-digit royalty based on product sales. IP2018 is similar to IPED2015 a monoamine reuptake inhibitor, but with the main focus on the serotonin system, but also inhibits dopamine reuptake. The project is differentiated towards IP2015 and is being developed as a new treatment for individuals with mild to moderate depression with psychogenic ID. Initiator has conducted its own studies in animal models for depression which show that IP218 has an antidepressant effect and that the substance within the same dose range can have an antidepressant effect and strengthen erection. In these studies, IP2018 has been compared with Cipramil from Lundbeck, where it showed better or equivalent effect in mouse models for depression. Effects on ED have been shown at low dose levels.

Depression and anxiety can cause ED and in addition, treatments for these conditions often have a negative effect on ED. Prescribing of antidepressant drugs is high and is among the most prescribed drugs in Europe and the United States. A significant proportion of today's established treatments show a negative effect on sexual desire and arousal.

Recruitment has begun. At the beginning of October 2020, screening of patients for a Phase 2a studies to be carried out in the UK at MAC will begin. The study will include 24 patients divided into 3 groups, two different doses of IP2018 and one receiving placebo. The main purpose is to evaluate the effect and a result similar to IPED2015 is expected. The main difference in this study is that individuals to be recruited are younger and exhibit mild to moderate depression. The plan is to complete the study in mid-2021.

The global erectile dysfunction drugs market has been segmented based on and region.

The market, based on drug, has been bifurcated into viagra (sildenafil citrate), cialis (tadalafil), staxyn/levitra (vardenafil), stendra/spedra (avanafil), zydena (udenafil), vitaros (alprostadil cream), and others. The market, on the basis of end user, has been segmented into hospital pharmacy, retail pharmacy, and online pharmacy. Based on drug, viagra segment is expected to hold a major share in the market as it is the first Food and Drug Administration (FDA) approved oral treatment for erectile dysfunction. In 1998, Pfizer introduced viagra which is dominating the erectile dysfunction market. Cialis segment is expected to be the fastest growing segment as cialis provides an erection over a longer period than viagra, cialis lasts up to 18 hours, while viagra only lasts for about 4 to 6 hours.

30% of ED patient doesn't respond to the traditional drugs on the market. This is where Initiator Pharma comes to play.

None to few Challengers

As I mentioned earlier, 30-40% do not achieve satisfactory results with PDE5 inhibitors (viagra etc). For these individuals, there are limited documented effective treatment options that can help the patient.Although large groups lack effective and simple treatment, activity is relatively low with only a few active clinical projects. In addition to the projects listed below, there are also local development projects, including in Asia and a number of academic institutions. But there is no clear product in sight! 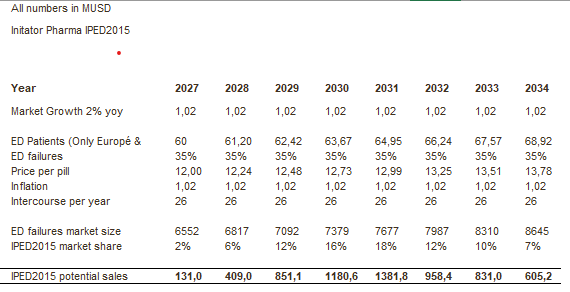 Using median price as Viagra when it was first introduced, Sales will top 1.3B dollar in 2031 but we use 851M dollars as our standpoint. Lets assume a 30% IDTA Margin, the Company is small, not a lot of R&D. 50% of sales belongs to BP (and they finance the whole Project).

My valuation as we stand is 153M USD, the Company value today is 120m SEK which is approx 14M USD.

This is not a recommendation. I do own shares in the Company. Always do your research Before investing.

You need to login to read and post comments.

The Redeye community members are responsible for their content. As a reader, you’re encouraged to critically analyze the content and do your own research. Before posting or commenting, please review our Rules & Guidelines